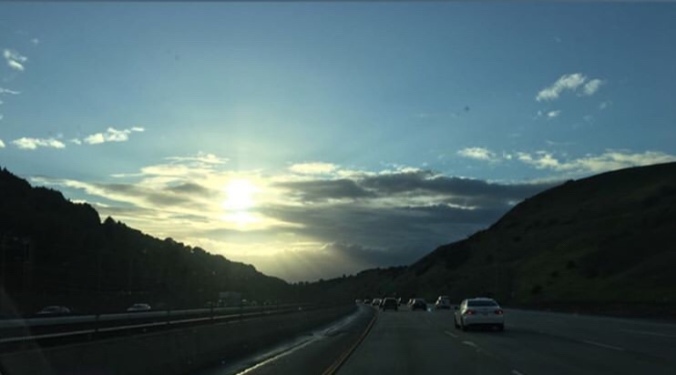 There were a few incidents of late that led me to reflect on the issue of Good Samaritans appearing in one’s life and making all the difference in the world.   I’ve been chewing on and reflecting upon this subject and trying to bring the scattered seeds of thought together into one cohesive whole so I can write this blog entry.

It all started with a road trip with my son, his wife and their three sons during the recent Easter break.  On the day of our departure we were met with rainy and stormy weather.  Not the most ideal of conditions in which to begin our road trip,  but we were locked in and were going to make the best of it.  My son took the wheel of my SUV and drove at a safe and cautious speed…our destination was four hours away and we also had a couple of appointments to get to.  However, we proceeded with caution as heavy rain pelted our vehicle. Above all, the goal was to stay safe.  I felt confident and safe with my son at the wheel.

We were halfway through our trip when suddenly a surreal scene erupted out of the mist.  We saw an overturned vehicle off the highway in a ditch, and a man held a small child in his right arm and with his left hand was trying to open a passenger door.   A gasp inflated my rib cage and I think I stopped breathing for a second.  Compassion, worry, shock overtook me and the other occupants of our vehicle and as we retrieved our collective breath, we looked at each other and didn’t need to say anything for we were all on the same page – we needed to go back.  So, when the next exit came, we took it so we could circle back and see if we could offer help. 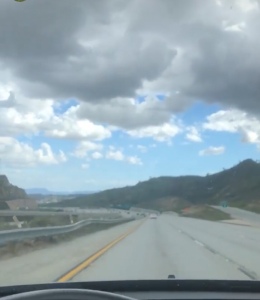 A man with a baby in his arm, bending over an overturned vehicle trying to open a passenger door. I couldn’t shake the images from my brain.

As we came closer to the scene of the accident we noticed other cars had stopped and a group of people surrounded the vehicle.  Help was there.  Adding another vehicle of 3 adults and 3 children to the scene didn’t seem to make sense.  But we sighed a collective sigh of relief fairly comfortable in the realization that help was there and the man was not alone.

As we continued on our trip, my 13 year old grandson finally spoke (we had all been very quiet).  He said that seeing that accident put all kinds of butterflies in his stomach.  Fear, shock, disbelief.  I was happy he could voice his fears, and what a sensitive young man, concerned about others, strangers he did not know.  Trying to comprehend the pain and possible tragedy of the scene before him, his heart and stomach had swelled with concern.  I know he will grow up to be a terrific man and human being.

When I returned from vacation, I related the story of the overturned vehicle to my eldest son.  He stopped for a moment, deep in thought, and then shared, “When my brother and I were in that car accident, he said I’m sorry at the second he knew the truck was going to roll over.”   I choked back an urge to cry.  My two sons were in a bad accident about 14 years ago that left them also turned upside down in a small truck in a ditch.  The truck had hit a slick spot on the highway on a rainy day, fishtailed, and rolled over several times off the side of the highway into a ditch. The roof of the cab was severely smashed in but they both were able to crawl out the  back window, with barely a scratch on either of them.  But in the moment my younger son, who was behind the wheel, realized what was about to happen, he said two words to his older brother in the passenger seat:  “I’m sorry.”

Vehicles stopped; people got out to offer assistance; first responders arrived.  Help was there. They were not alone.

Later I would find out that a lady in my golf club had been driving by at the same time and saw the accident as it took place but couldn’t stop in time.  She looked in her rear view mirror and was able to see others stopping to help.  I don’t know how we ended up speaking about this accident but when we did, she vigorously grabbed my shoulders and asked me (pleaded with me really) if they were okay.  I said they were.  She had been so frightened of what she saw that she made an unscheduled stop at St. Patrick’s Church in San Francisco to say prayers for them.  She was an angel.  She didn’t know who was in the truck and it didn’t matter; her heart and stomach swelled with concern and she reached out to a Higher Power for assistance.  I would also find out that one of the first responders was a cousin of a childhood friend.  My boys were being looked after but in the seconds the truck was rolling over not once but probably three times, what must have gone through their minds?  Both are happily married now with beautiful wives and children.

A few days after this accident I was driving to work and I noticed a tow truck in front of me and it was towing a small maroon truck with a cab whose roof was crushed in.  I blinked a couple of times and realized it was my son’s truck and for the life of me, I stared at that crushed cab and wondered how my two six foot plus boys crawled out of there unscathed. A miracle, if you ask me.

But this is not the end of the story of good Samaritans on the road.  During Easter vacation, I hired a driver to take my daughter-in-law and I to an appointment at a spa 20 or so miles away.  There was a nasty wind storm buffeting the desert and we weren’t used to driving in conditions like that, so we said “let’s hire a driver!” A repair man who was at our home at the time recommended not getting on the road unless it was an emergency.  Along with the strong winds came blowing sand that could obstruct views and damage cars.  Still we stuck with our plan to hire a driver and he was a wonderful young man who got us safe and sound to our destination.  And in the course of the 30 minute drive, we learned a bit about his life.  He loved cars and motorcycles and once upon a time in conditions of fierce desert winds, he and his motorcycle had been blown into a highway barrier while negotiating a turn.  His left arm got caught on something and was torn to shreds.  I looked over the seat and noticed a deep scar on his forearm.  He said he owed his life to a good Samaritan who stopped to take care of him and stayed with him until an ambulance and EMTs could arrive.  The good Samaritan happened to be a nurse and knew what to do, and he said he would have been dead had it not been for her.  She kept him alive.  He was in a coma and didn’t wake up until a week or two later and never had a chance to thank her.  He never learned her name, but she was an angel to be sure.  He went on to happily marry and have children.

Every day is a blessing.  A new acquaintance who endured breast cancer said if she is asked to worry about something and it’s not death, and it’s not terminal illness, she lets it go.  Another new friend who also battled breast cancer opines, “Don’t sweat the small stuff. We are allotted a certain number of days on this planet, so why fill precious hours with things that are of little consequence?”  During the visit to the spa and mineral springs, I had a chat with an employee there and she shared that one of the oldest people in the world attributed his longevity to minerals springs… and not holding onto  resentments.  Letting go.

This reminds me that in the 12 step program of Alanon, we learn that when we harbor resentments, it’s an opportunity to take a look inside of ourselves and glean our part in the matter.  Not easy work whatsoever, but totally worth it especially if one wishes to take any steps forward in finding self-understanding and a semblance of serenity.

In the rooms of Alanon, we find hope and understanding beyond our wildest dreams.  We also find out we are not alone.   Some of us have become so discouraged we feel that we ourselves are laying in a ditch, face down, with hope fading.  Alanon becomes our life line and we find ourselves surrounded by good Samaritans willing to reach out with a helping hand.  For the first time in our lives we finally begin to comprehend that we didn’t cause the drinking problem or other addiction in our friends or loved ones, and we certainly can’t control or cure it.   All we can do is try to keep the focus on ourselves and work on our own health and recovery, while wishing the best for others and holding them uppermost in our thoughts and prayers.

I suppose this theme of late that centered around car accidents also gave me an opportunity to think about savoring each day and reflecting upon the gift of life.  Each day is a chance to start anew, to make amends if needed, to find joy and hone in on what really matters.   Each day also gives us an opportunity to be of service and perhaps offer a smile or kind word to others.  We feel better about ourselves as a result, and if somehow we stumble into a ravine (which we all do because we are human), we pick ourselves up, climb out with a little help with our friends, dust off the dirt and debris, and try again, one minute, one day at a time.

Happy May Day and may you stay safe on your journey.

8 thoughts on “Good Samaritans on the Road of Life”